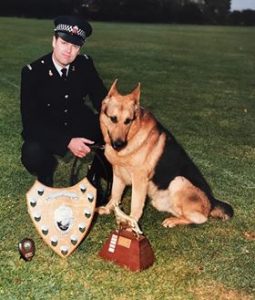 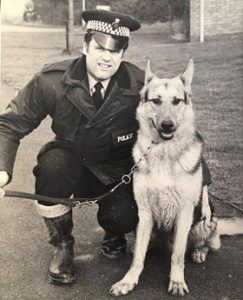 Shane won the City of London and Home Counties Police Dog Competition for Obedience and Emergency Stop. This Trophy was received by PC Sterry and Shane at Imber Court in the 1980’s.

Trophies pictured above were won for; Best Obedience in the force dog trials, second overall and Highest Scoring average for the Dog section.

Shane wore the Essex Coat of Arms in the Colchester Military Tattoo in the 80’s.

He passed out as a general purpose police dog in December 2004. He got his first prisoner on his very first shift. He was a superb tracking dog. He recovered from a stomach torsion whilst still an operational dog and finally retired in September 2012 at the age of 9 & ½. He remained with his family on retirement but was diagnosed with degenerative radial myelopathy over 2 years ago. His hydrotherapy sessions were funded by Essex retired police dogs fund. However he finally succumbed to his debilitating disease and was put to sleep 24/03/18, less than a month before his 15th birthday.

German Shepherd Kaiser and handler Pc Andy Kemp have been involved in 289 arrests since they were paired together in December 2008.

Mentioned on the commendation, presented at Essex Police headquarters in Chelmsford, was the arrest of a man who had decamped from a suspected stolen car in Corringham.

Pc Kemp was on night duty with sidekick Kaiser when he carried out a stop check on a car which failed to stop and made off down a single track road before crashing.

The Chigwell-based officer arrived to see two men escape the car and disappear into the darkness. Despite heavy snow and wind, Kaiser picked up a scent and tracked one of the men to a deep ditch filled with water.
Pc Kemp had become separated from Kaiser but arrived to find his dog holding on to the suspect. Kaiser kept hold until he was instructed to let go by Pc Kemp despite the suspect trying to harm him.

Kaiser retired in 2013 and was re homed with Tim & Emma, where he lived happily with a menagerie of animals. After a short illness Kaiser passed away peacefully with his new owners Tim & Emma and Andy by his side.