The National K-9 Memorial Medal is the first of its kind in the United Kingdom. It is available for presentation to Police Dogs upon retirement, or in recognition of their bravery.  If you wish to discuss acquiring a medal for a retiring dog, please get in touch via email.

PD Mindy, who sadly passed away in September 2020 has been awarded the National K9  Memorial Medal for her service to Civil Nuclear Constabulary,

PD Thor and his handler who serve with Cheshire and North Wales Police Dog Unit have been awarded the National K9 Memorial Medal in recognition of a long and distinguished career.

Served with Norfolk/Suffolk Constabulary between 2006 & 2014

RPD Norman served with Leicestershire Police from December 2010 to May 2020 when he retired along with his handler PC Harrington. As a retirement gift from the Dog Section Norman was presented with a Memorial Medal.

PD Buster and PD Sam both serve with Police Scotland protecting our ports.  They were recently presented with a Memorial Medal. 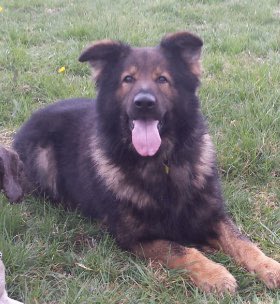 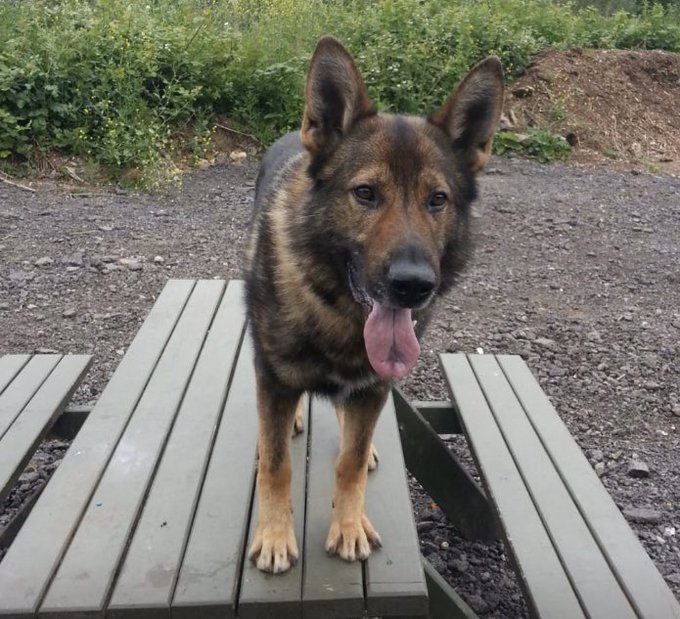 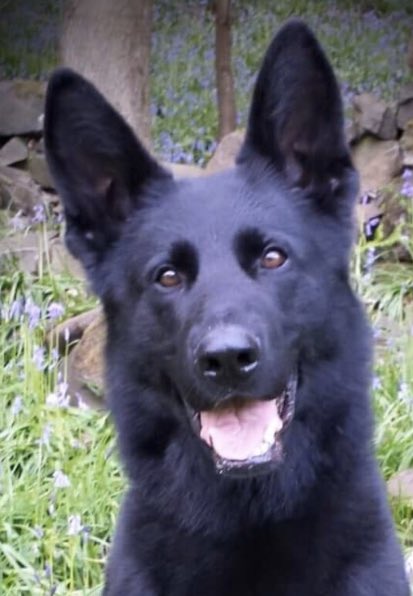 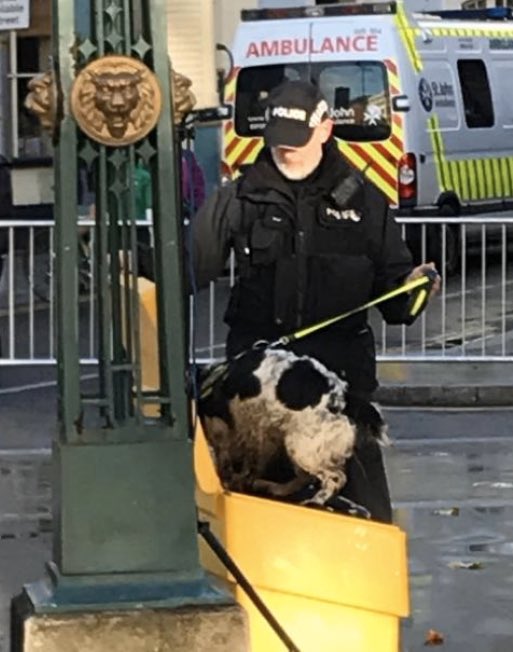 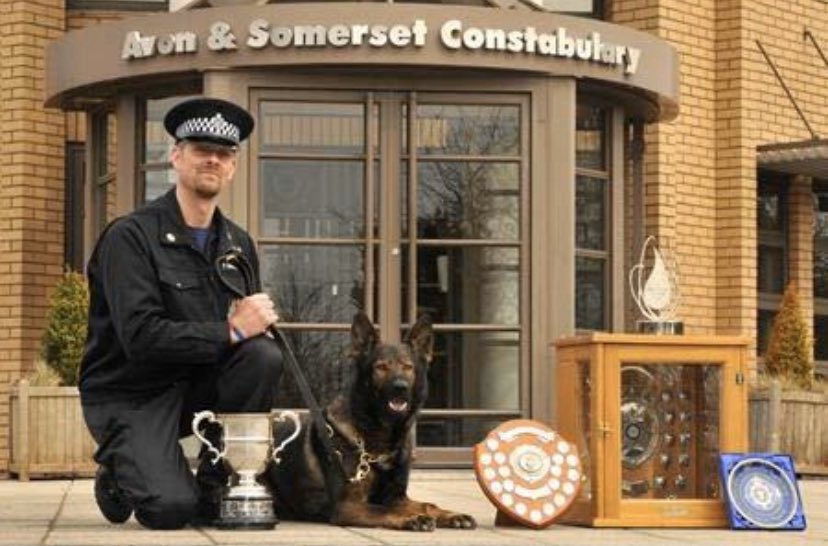 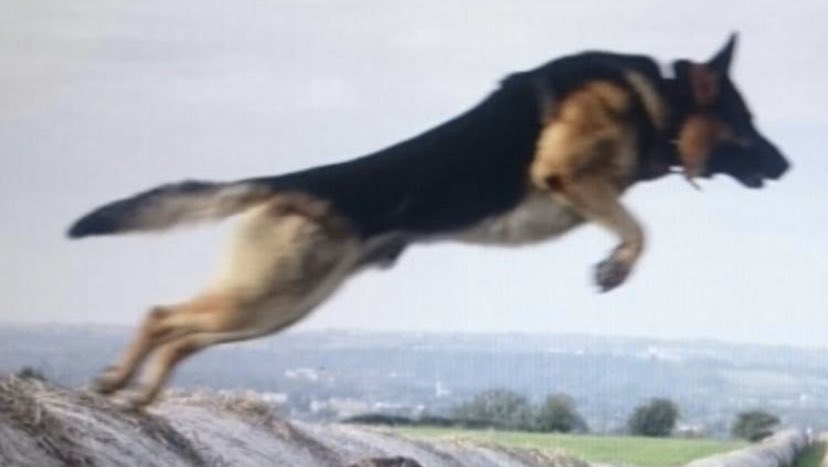 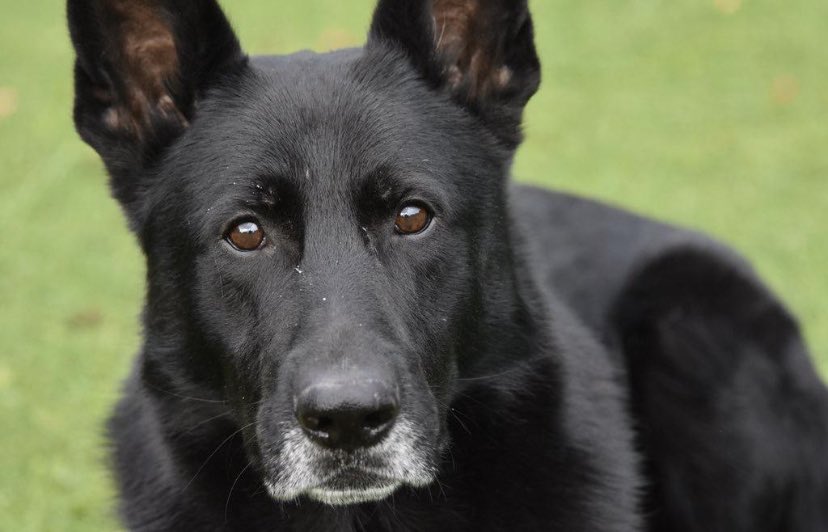 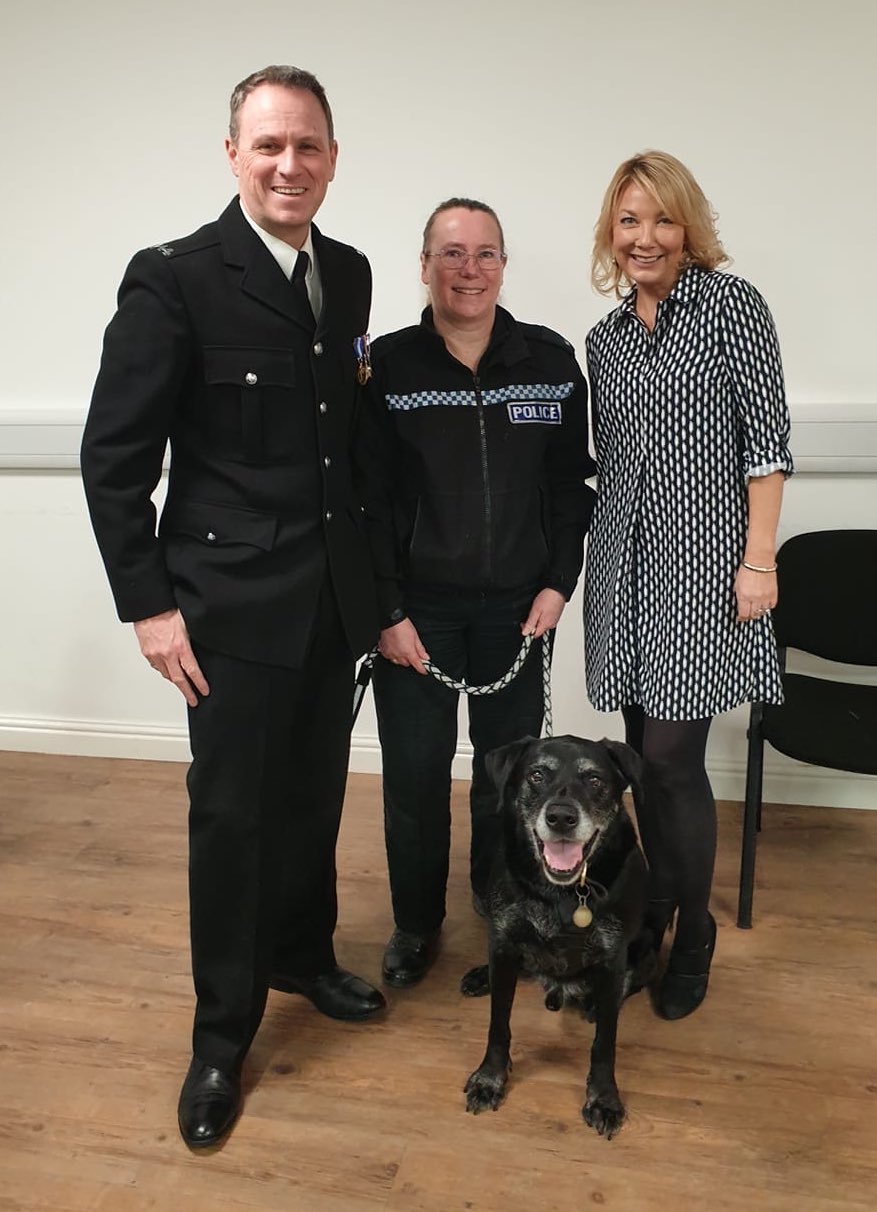 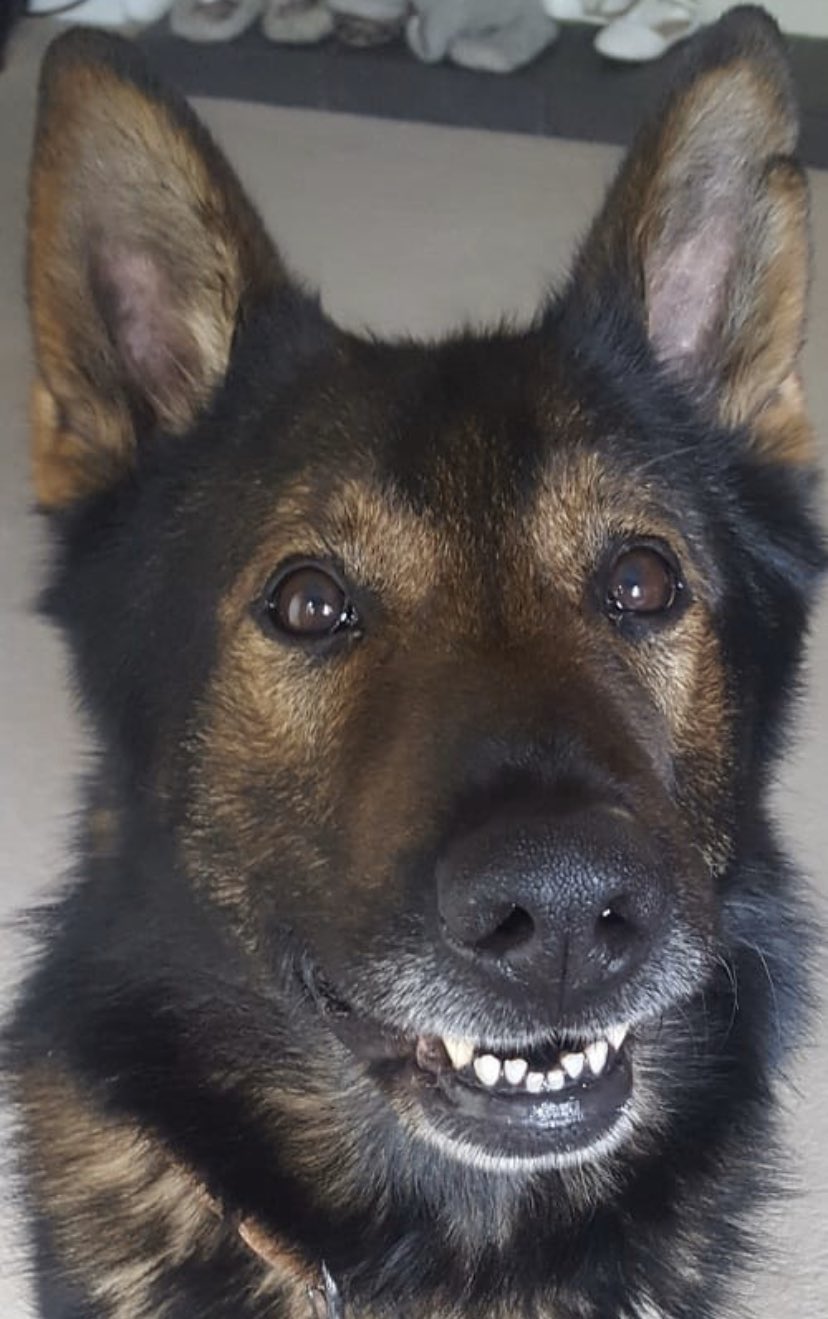 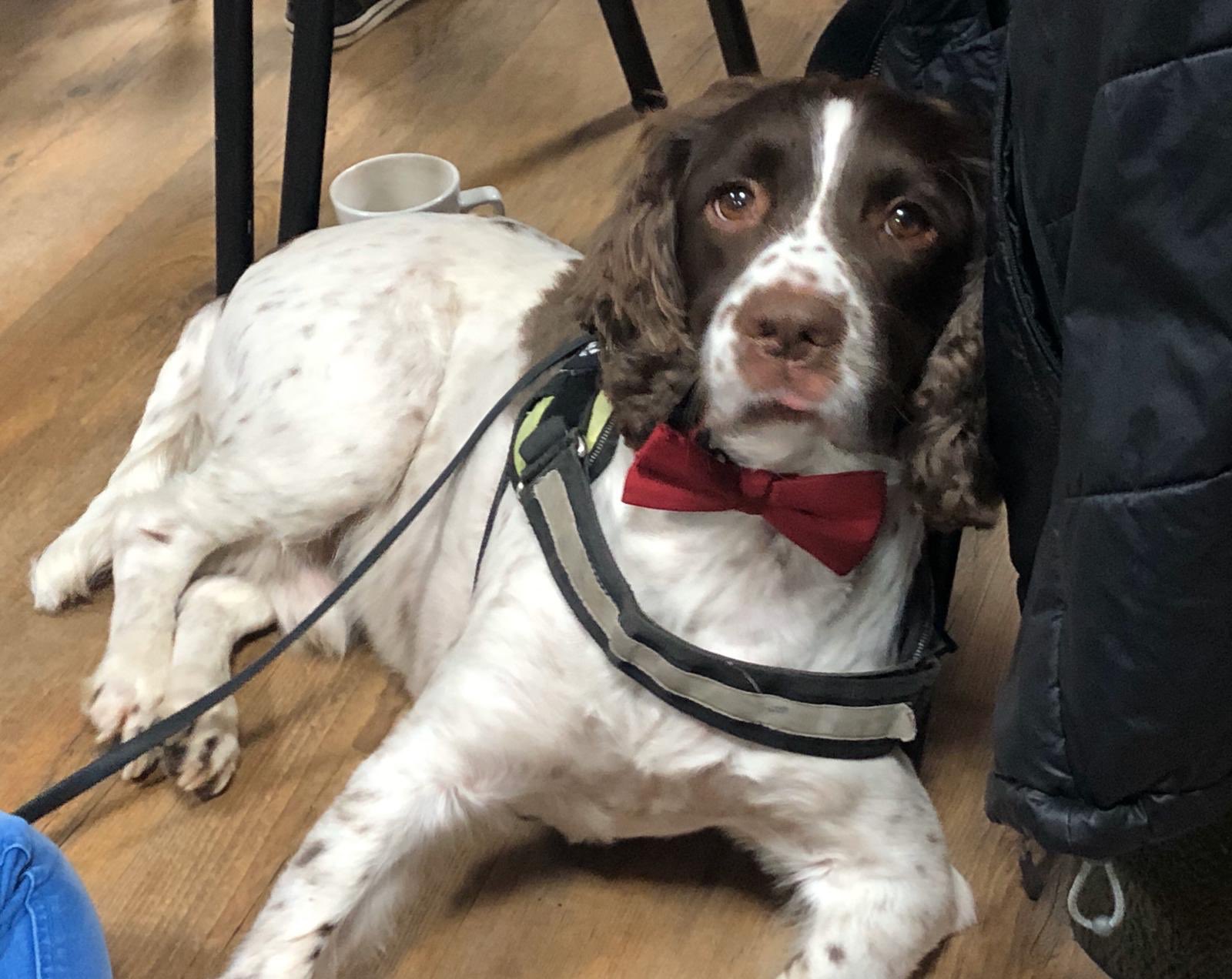 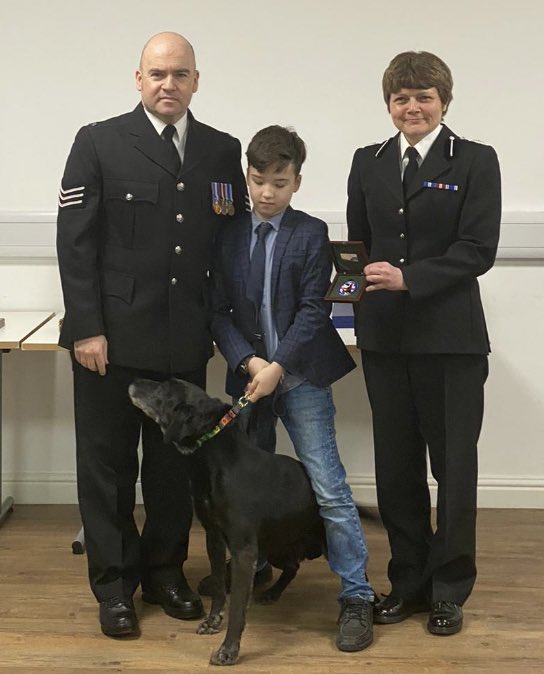 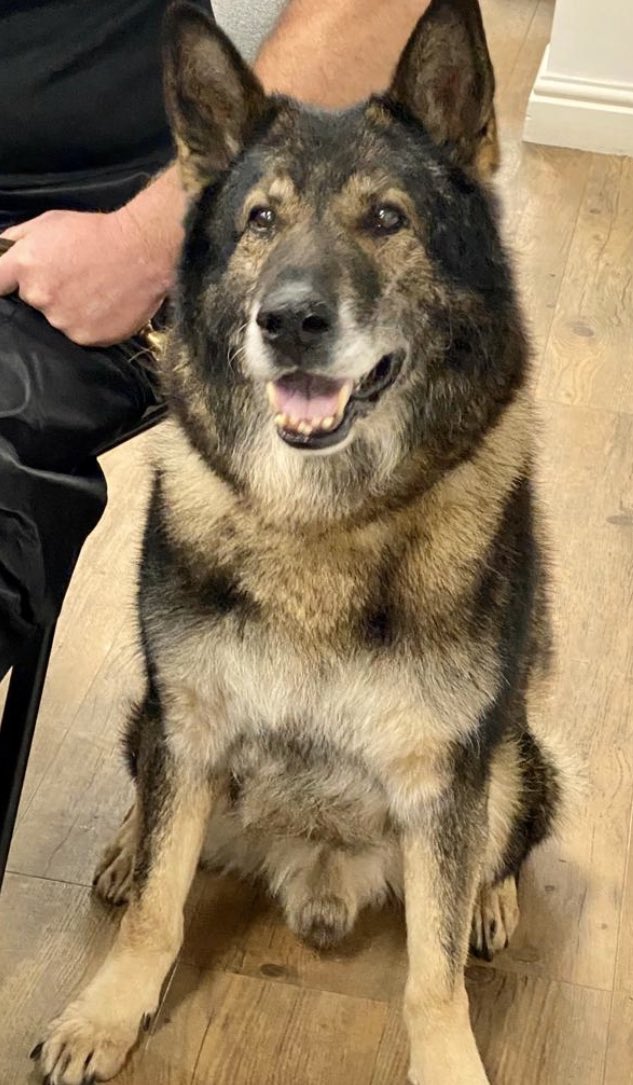 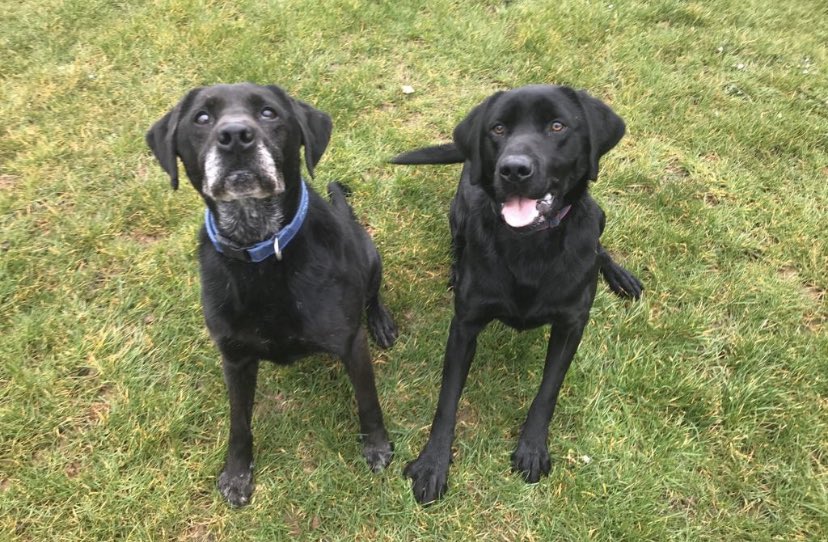 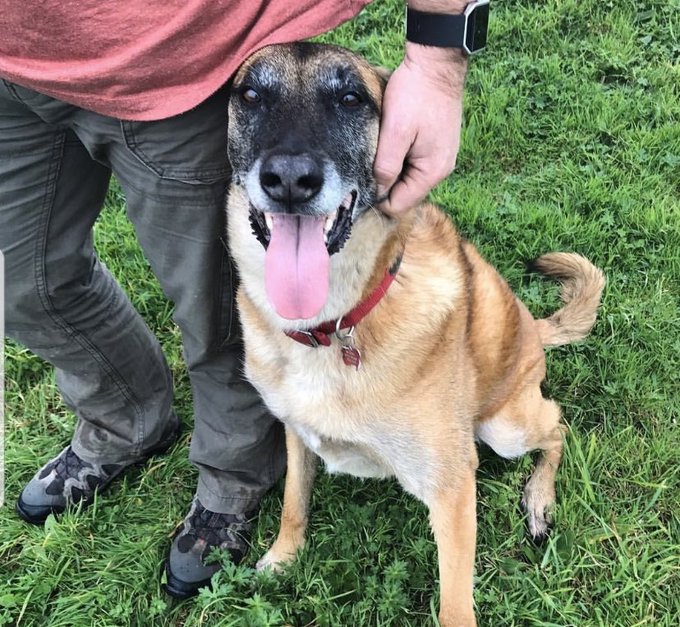 PD Buck served with Police Scotland until he passed away in October 2019.

Eric received a Memorial Medal for his work supporting police operations.  He is the first non-police dog to be awarded our medal.

PD Lex served with The National Crime Agency until he sadly passed away in August 2019.

RPD Keach served with Police Scotland and became famous for writing the statement pictured below to the Crown Office, she signed it PD Peach,  her name was changed when she moved to Scotland.

RPD Ellie served with Police Scotland. Eliie was injured on duty aged 5 1/2, whilst chasing a criminal she twisted her spine to avoid being hit by a police car.  Eliie is now 11 1/2.

On Sunday 10th September 2006 as a result of a public order incident at Laugharne, Carmarthenshire three officers attended a farm on the outskirts of the town to speak with one of the offenders.

On seeing the officers the farmer attacked them in his “Manitou” “telehandler” and demolished both police vehicles.

Six police officers and police dog Bryn were deployed to the farm in an attempt to locate the farmer and negotiate a surrender.

The farmer was located exiting the cowshed and again he attacked the officers, this time armed with a four foot long hedging hook. Bryn was deployed and bit the farmer on the arm. The farmer managed to drag Bryn into the cowshed.

Bryn appeared behind the farmer who was standing in the manger and bit him on the leg. This distraction enabled the officers to overpower the farmer and arrest him.

Bryn had found his way through the cattle into the manger and launched the final attack, whilst mortally wounded.

Bryn died in his handlers arms at the scene having been critically wounded when he was dragged into the shed.

The farmer was charged with serious criminal offences, including the attempted murder of a police officer.

In the early hours of Wednesday 18th May 2016 Rebus was killed in an authorised pursuit after a car had failed to stop for police.

Rebus was deployed to detain offenders who had ran from the offending vehicle at around 03:00 hours and was struck by a police 4×4.

Emergency care was given to Rebus at the scene but tragically died with his handler by his side.

At 03:00 hours on 8th November 2016, PC Bartley and PD Ghost responded to a burglary in progress at a rural Garden Centre.

The team located the stolen get-away vehicle and disturbed the offenders. Ghost bravely pursued the criminals over fences, fields and dense woodland, tragically losing his life on a nearby motorway.

Poppy is a black and white English Springer Spaniel.

Poppy came from a rescue centre called ‘Just Springer Rescue’.  She was born 28th October 2010 and allocated to PC Pearce on 3rd August 2011.

She had sores all over her, conjunctivitis, underweight and had a split tail. Her tail need to be docked as a result of that injury.  She started her basic Explosive Detection Course on 14th November 2011 and also passed with ﬂying colours. She was licensed on 18th January 2012.

Poppy was licensed in time for the preparation for the London Olympics as well as all the day to day searches that she was involved in. This could be anything from Heathrow Airport to Buckingham Palace, Twickenham Stadium to Remembrance Day Parades, to name a few.  Poppy was also selected to travel to Scotland for the Commonwealth Games to assist in securing a safe Games.

Poppy was retired from the Met on 28th April 2016 with Ankylosing Spondylosis, a serious back condition, which means she has extra bone growth growing along her spine restricting her movement and inﬂaming her nerves.

Poppy deserves her retirement and is a strong willed dog who will keep going and loves life. She is special.

RPD Cali was handled by PC Meikle and served with Police Scotland.  Cali was awarded her medal following her retirement.

RPD Slaine was born on 29.04.11.  He became a trainee pup with Strathclyde Police at 3 months old and lived with his handler PC Farndell. He licenced with Police Scotland and was operational from April 2013 – January 2019.  He was a formidable character, not to be messed with who loved his job.  He is enjoying his retirement on Isle Of Barra with his handler.

RPD Clark served with PC David Davidson and was awarded a K9 Memorial Medal upon his retirement from Police Scotland.

RPD Isla served with PC David Davidson and was awarded a K9 Memorial Medal upon her retirement from Police Scotland.

RPD Barley was awarded a K9 Memorial  Medal upon her retirement from Police Scotland.

RPD Bodie was awarded a K9 Memorial  Medal upon his retirement from Police Scotland.

RPD Peppi was awarded a K9 Memorial  Medal upon his retirement from Police Scotland.

PD Kai was awarded a K9 Memorial  Medal when he passed away in 2018, whilst still a serving police dog with Police Scotland.

German Shepherd Dog Kes was born as part of the West Yorkshire Police breed programme. She served as a GPD and Firearms support dog from 2010.

Springer Spaniel Fern was a Drugs, Firearms and Cash specialist search dog. She was a gift dog and served in West Yorkshire from February 2009.

Both dogs retired in Summer 2017, and remained with their handler. They are loving retirement, especially having no more shift work. Kes and Fern now spend their days having lots of fun walks and treats. However, they still want to get in the back of the car if the boot’s open!

German Shepherd Dog Bryn was shot and killed in February 1998. The actions of Bryn saved his handler and members of the public from serious injury. Bryn’s handler Ian Churms was presented a medal to honour Bryn’s bravery in a ceremony to mark the twenty year anniversary.

Bear was awarded the K9 Memorial medal to mark his retirement from Gloucestershire police.

Dutch and Nex from Staffordshire were posthumously awarded the K9 Memorial medal at Crufts 2018. Watch the presentation on our Youtube.

PD Canto was five and a half years old, when in August 2017 he protected his newly assigned handler and other officers from a man with a large knife. Canto became injured in the process. Below is what occurred that night and was told to the K9 Memorial by Emma Worrall, PD Canto’s Handler. Canto made a full recovery, and is starting a firearms support course with his handler in July 2018.

“I re-handled Canto when he was 5 ½ years old, prior to coming to the police he was training to be a ‘protection’ dog, but was deemed slightly too OTT. Subsequently he came to us. He was a licensed firearms support dog with his previous handler.He came to me on 3rd August. We completed a 2 week ‘re-handle’ course and were sent on our way. I was very happy with my new crew mate, safe in the knowledge that he was a much better dog than I was handler!!!

On 21st August we were deployed to an incident where a Male was harming himself. He had threatened to harm anyone who entered the premises, why we were there. It was very much like a training scenario. The Male was shouting out of the windows and Canto knew what this game was. We then had information from a friend of the Male about what he had taken. This was passed to paramedics already on scene. Who advised us that entry was vital to save the males life. The front door was unlocked and Canto and I were first in the queue at the door.

The door was opened, I was shouting a challenge about being police with a dog. The Male started running at us with a large knife. My only memory is of seeing the knife and hearing him shouting. I had no choice but to release Canto. Canto jumped up towards the males face. Suddenly he fell to the floor. I was stunned. I knew Canto was a good dog. Why was he not doing as he was told?

I again said ‘Canto, hold him.’ Canto looked at me and started barking at the Male. The Male was distracted looking at Canto when an officer behind me was able to taser the Male. At the sound of the electricity Canto ran into a different room. In the same second I realised the male had been tasered and Canto had been stabbed. I ran after him. Closed the door and felt down Canto’s sides. I found nothing and thought all was OK. I then saw a significant amount of blood on the floor and Cantos paws. I then felt down from Canto’s neck and felt wet on his chest. I pulled my hand away and saw it covered in blood.

He was still standing. I put him on his lead and ran out of the address with him. Put him in the police car and drove on blue lights to the vets. He was sedated and then I saw the injury. At this point I went to bits.

Canto had emergency surgery. Afterwards they asked I take him home as he was stressed in the vets. I spent the night with him lying on the floor next to the sofa. I had my hand on his chest all night. In the morning he came round and I took him for a short walk. Afterwards he was straight back to normal trying to get me to play with his nylabone. Since then we’ve not managed to get him to live outside.

He really is a wonderful dog, when not at work, he’s got a lovely temperament. I can have him around anyone without concern. However, when he knows he’s working he’s super switched on. I still know I can rely on him. He is sociable with other dogs and is just fab. He really is my boy and I adore him”.

Millie and Zip from Police Scotland were awarded the medal for second place in our Robert Oxley painting competition.